Libyan factions agree to hold elections on 10 December [The Guardian]

Libyan factions agree to hold elections on 10 December [The Guardian]

The four key leaders in war-torn Libya have agreed at a summit in Paris to an ambitious, and potentially unrealistic, plan to stage “credible, peaceful” parliamentary and legislative elections in the country on 10 December.

Emmanuel Macron, the French president and the summit’s host, hailed the agreement as a turning point in efforts to bring about reconciliation in Libya, saying it represented a new impetus to restore Libya’s sovereignty.

“We now have clear commitments for the country, an approved calendar for parliamentary and presidential elections,” he said.

The parties also agreed that by 16 September they would establish the constitutional basis for elections and adopt the necessary electoral laws.

The key passage reads: “We pledge … to work constructively with the United Nations to hold credible and peaceful elections on December 10 and to respect the results of the elections.”

The statement is endorsed, but not signed, by Fayez al-Sarraj, the prime minister of Libya’s UN-backed government in Tripoli; the military leader of the east of the country, Khalifa Haftar; the president of the house of representatives, Aguila Saleh; and the head of the council of state, Khaled al-Mishri. 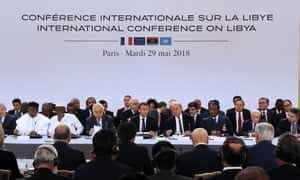 Macron said the agreement had not been signed because the groups needed to consult, and any case they did not recognise one another’s authority.

There had been a dispute about whether the presidential elections could go ahead without prior agreement between the factions on the basics of a constitution. The two chief factions based in the east and west of the country have been unable to agree a constitution for two years, but the election of a new national leadership could cut through these disagreements.

Twenty-four organisations, including five African heads of state attended the summit, in a sign of how badly the Libyan civil war has damaged the continent and southern Europe.

Speaking at a press conference after the agreement, Macron said he was not naive and there remained a risk of terrorists disrupting the elections. Twelve people were killed in an Islamic State attack on the headquarters of the Electoral Commission in Tripoli on 2 May.

But Macron said it had been the first time the entire international community with an interest in Libya had come together to endorse this process of reconciliation. He said there was Libyan will to move to elections that justified pushing the timetable forward.

Ghassan Salamé, the UN special envoy for Libya, admitted there remained huge work to be done, and he called for a ceasefire among all the groups to allow the preparations for the elections, saying “enough blood has been spilled”.

The agreement states Libyan security forces “will be in charge of guaranteeing the electoral process”, with “appropriate support” from the UN, regional organisations and the international community.

Those responsible for any obstruction of the electoral process will have to “render an account”, the accord adds, without specifying what, if any, sanctions it could incur.

To “improve the climate for national elections”, the Tobruk-based house of representatives close to Haftar will have to relocate to Tripoli and the parallel government established in the eastern part of the country will eventually have to be dismantled.

The two houses must “immediately work to unify the central bank of Libya and other institutions”, they agreed. The agreement also proposes a national inclusive conference, but no timetable was set.

In the medium term, the military and security forces, divided into multiple militias besides the self-proclaimed Libyan National Army (LNA) of Haftar, will also have to be unified under the auspices of the UN.

Claudia Gazzini, senior Libya analyst for the non-governmental International Crisis Group, said: “There is some symbolic importance to the fact that the four Libyan leaders agreed to sit together. But the key will be to see if the four deliver on their promises and how others, including their allies at home, react.”

She described the timetable as extremely optimistic and expressed concern that it put too much emphasis on elections as a solution as opposed to the military, security and economic dimensions.

Haftar’s commitment to democracy has been questioned by his critics, and in the run-up to the conference the LNA was making gains at the gates of Derna, a key coastal town held by Islamists.

Haftar has presented himself to the west as a strongman who can bring order to the country and end the crisis that has led to more than 400,000 Africans being trafficked through Libya to reach Italy by boat.

The advance of populist parties in Italy has largely been put down to the Italian public’s anger at the failure to control the flow of African refugees and migrants. Although the number of arrivals has slowed dramatically over the past year, more than 11,000 people have been registered in Italy so far in 2018 after being picked up in the Mediterranean. The figure is more than 75% down on the same point in 2017.

The scale of the public opposition appears to have caught pro-European Italians by surprise. Reflecting on the recent Italian elections, Emma Bonino, a former Italian minister, told a Paris seminar on Monday: “We knew there was a wave of scepticism, nationalism and racism that could come in but we did not know it would be a tsunami.”